Just got the July batch of Weekly What's Large Where off to the presses, and sending out this week's installment to members. Also, look for a little WLT contribution to the California State Fair - we just scanned and sent some images to their Exhibition crew for a Quirky Travel site display.

Anyone eating a World's Largest Thing this summer, festival-wise? There are giant Cherry Pies to be had in George, Washington, the W.L. Pecan Pie in Okmulgee, and countless other feats of food fare to be had out there... If you partake, please post a pic or two! ... of the World's Largest Souvenir Travel Plate. The vignetting and rusty tones of the crop are amazing in this one.

By Avi Issacharoff, Haaretz Correspondent
A Palestinian man from the West Bank city of Nablus set a Guinness world record recently after baking the world's largest knafeh pastry, the Palestinian Maan News Agency reported Sunday.
Some 600 kg of cheese and 300 kg of sugar were used in the making of the sweet pastry, along with 35 kg of pistachios.

The enormous knafeh measures 75 meters long and two meters wide, and has an estimated weight of about 1,350 kg.
According to 36-year-old Mohand Arabi, one of the project's initiators, the group that prepared the massive dessert has all the Guinness documentation in their possession, securing their attempt as an official record.

Knafeh is a sweet pastry, renowned throughout the Arab world, Turkey as well as in Israel. It is made primarily of noodles and honey-sweetened goat cheese.

The town of Nablus is considered to be the birth place of the knafeh, which it is believed to have first appeared at the beginning of the 15th century.

Nabulus's knafeh is famous thanks to the special Nabulsi cheese used in its preparation.
found on http://www.haaretz.com
Posted by World's Largest Things, Inc. at 10:36 PM 1 comment: 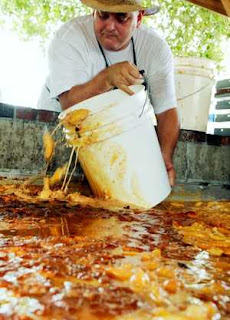 People from across the state came to Fort Valley on Saturday to participate in the festival and to have a bowl of "the world's largest peach cobbler."

Whether it actually is the largest is unclear.

"We just say it is," said Rich Bennett, the Georgia Peach Festival's president and the head cook.

But who would dispute the claim, with cooks mixing the ingredients in six large clean trash cans using rakes and boat paddles before spreading it out on a metal pan for almost eight hours of cooking.

People said they enjoyed their servings of peach cobbler, doled out in Styrofoam bowls and served hot.

Most agreed that considering the size it was not half bad.

"Well compared to my late wife's, it's not as good, but she didn't make it this big," said Jack Broshar from Atlanta.

The cobbler is cooked on a large metal pan under a wooden pavilion, which sits all year ready for the next year's cobbler.

There are some problems that come into play when cooking such a large concoction.

"It's very, very hard not to burn the bottom," Bennett said. And some of the bottom of the cobbler burned Saturday.

Cooks started arriving at 4 a.m. and covered the pan at 6:02 a.m., according to Bennett. Dessert was served at 2 p.m.

Besides the giant peach cobbler, attendees could pick from a wide selection of foods and peach products available for purchase.

Michelle Yingling, who has worked at the festival for 21 years, said she expected to sell 5,000 peaches Saturday. This was the 23rd Georgia Peach Festival, Bennett said.

"The purpose of the festival is to celebrate the peach growers," Bennett said. "Peach County wouldn't exist without peach growers." 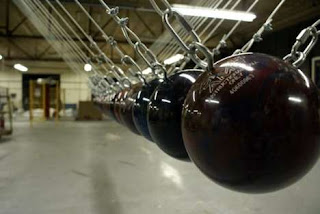 Lambs Farm Attempts to Beat a World Record at Woofstock 2009

Libertyville, IL - Lambs Farm's Participants and staff are baking a dog biscuit guaranteed to treat hundreds of hungry hounds. How big must this delicious treat be? In order to break the current world record, the biscuit should weigh nearly 400 pounds and measure 16 feet, and that is what Lambs Farm plans to do. The organization will unveil the world's largest dog biscuit on Saturday, June 20 at Woofstock - One Day of Puppy Love.

The agency has already applied to attempt the record-setting feat, and will submit its official results after the final weigh-in. The mammoth dog treat's recipe includes 300 pounds of flour, 50 pounds of peanut butter and 20 pounds of eggs. After the official weigh-in and photos, the biscuit will be cut up and samples will be available for all four-legged Woofstock attendees.

Woofstock will be held Saturday, June 20 at Lambs Farm from 10 a.m. to 4 p.m., and is presented by Suncast Corporation, and sponsored by Record-A-Hit Entertainment and Natural Balance. For more information on Woofstock, or to be a vendor or demonstrator, please visit www.lambsfarm.org, or contact Claudia Stevens at 847.990.3750 or crs@lambsfarm.org. Lambs Farm is a non-profit organization dedicated to empowering adults with developmental disabilities to lead personally fulfilling lives through a full range of vocational, residential, social and recreational programs. Based near Libertyville, Illinois at the intersection of Rt. 176 and I-94, Lambs Farm has assisted individuals to create their own pathways to meaningful experiences, at home and in the community, since 1961. For more information on Lambs Farm, please visit www.lambsfarm.org. 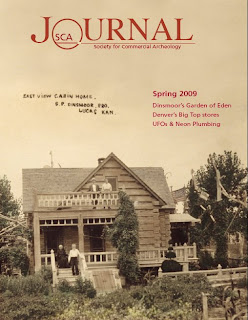 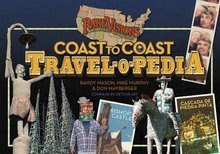 NEWS RELEASE:  June 17, 2009
FOR IMMEDIATE PUBLICATION
CONTACT:  Erika Nelson, info@worldslargestthings.com
LUCAS FEATURED IN TWO NEW NATIONAL PUBLICATIONS
Residents sometimes forget the unique place Lucas Kansas has on the national (and international!) roadmap.  Two new publications again focus on this amazing tiny town, with a lot of print space given to local attractions and culture.
First, the Society for Commerical Archeology Journal Spring 2009 issue features a 2000 word article, with over a dozen full color images, examining the Garden of Eden and it's impact.  This is an academic Journal, sent out to scholars and researchers, universities and members only.  It's used as the benchmark for a specific industry, the study of the American roadside.  Articles here often find themselves used as the basis for major thesis projects, cited in additional articles, and used as a valued resource.  The article in this issue was originally produced by Erika Nelson and Jon Blumb for Raw Vision magazine, and is re-printed here in its entirety.  Not only are there 8 full color pages inside, an historic photo of the Garden is used for the cover art.
Second, Rare Visions and Roadside Revelations have released a new Coast to Coast Travel-O-Pedia, a 200-plus page book listing all the interesting, amazing, and offbeat sites their fan-base needs to see.  The chapters are broken up by region, and the entire Midwest section starts out with Garden of Eden photos and kudos in the second paragraph:  "The list always begins in Lucas with the Garden of Eden."  These folks LOVE Lucas, and all it has to offer.  Town sites also grace the cover, as well as the standard listings in the information section, detailing hours and type of attractions found in Lucas.  And, one of S.P. Dinsmoor's sculptures is the largest element in the cover design, pointing the way to amazing things.
Congratulations, Lucas, on being exactly what you are.  Please, take a moment to remember how special and amazing a town like ours is, and that we have friends across the nation.
Posted by World's Largest Things, Inc. at 12:59 PM No comments: 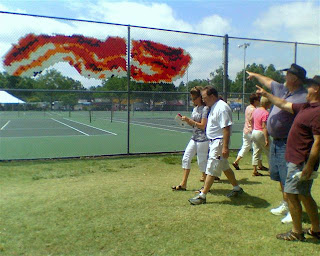 All enjoyed the most recent WLT project, the Bacolicious installation at the Smoky Hill River Festival (http://www.riverfestival.com/salina/)  in Salina Kansas.
Using a specially-designed product called Put-In-Cups (http://www.putincups.com/shop/index.php), the oversized strips of bacon are assembled from plastic inserts in a chain-link fence.  Three pieces made it up this year, with a lot of volunteer help.  There had been plans for four, but 20 hours and numberous bleeding fingers later, we decided on the traditional serving-size of three...
This was a temporary display, only up through the Festival weekend (June 12 - 14), but will re-appear on the North Tennis Court fence at the next fabulous event.
Thanks for help, Bacolicious Brothers, and for the great comments and pictures, WLT fans!
-Erika
Posted by World's Largest Things, Inc. at 2:08 PM 1 comment: 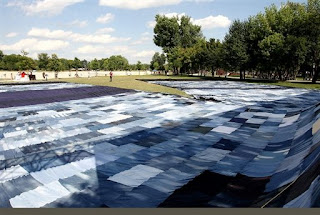 ZAGREB (AFP) — A pair of jeans the size of six tennis courts, stitched together from thousands donated for charity, should be recognised by Guinness World Records as the biggest anywhere, organisers said on Sunday.

Posted by World's Largest Things, Inc. at 9:47 AM No comments:

Two more packets go out today, one new, one renew... Best Back Yard Visitors of the month go to two WLT Fans who are meandering their way across the US, visiting only kitsch environments.
Now, packing for the big BACOLICIOUS project at the Smoky Hill River Festival - we're installing tomorrow and Thursday, on the upper tier of the tennis courts, visible throughout the festival this weekend in Salina Kansas.  C'mon by!
-Erika Nelson, Director WLT Inc.
Posted by World's Largest Things, Inc. at 1:02 PM No comments:

...even in Maugerville, New Brunswick Canada.
Posted by World's Largest Things, Inc. at 4:29 PM No comments: