We just completed the Blogging update, with everyone typing up a storm...
Posted by World's Largest Things, Inc. at 6:45 PM No comments:

From the Email Inbox: World's Largest Cheese Postcard on Ebay

GREAT CHROME POSTCARD OF WORLD'S LARGEST CHEESE, 34,591 LBS.  MADE BY STEVE'S CHEESE, DENMARK, WISCONSIN.  THIS FAMOUS CHEESE WAS ON DISPLAY AT THE NEW YORK WORLD' FAIR (1964-65).  STEVE SIUDZINSKI, OWNER.
Posted by World's Largest Things, Inc. at 9:11 AM No comments: 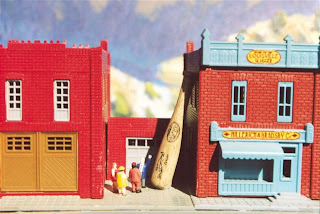 The WLCoWSVoWLT TRAAM needs a Museum Catalogue.  AND, there's usually GRANT MONEY for that!!!!!!!!!!!!!!!
Please, dear members and readers, don't let me forget this....
Posted by World's Largest Things, Inc. at 7:13 PM 2 comments: 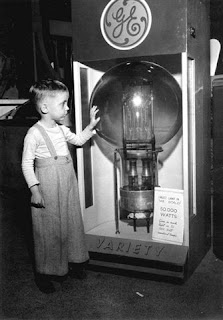 One of our WLT Members has been championing the World's Largest Lightbulb designation for a series of displays in Florida.  Check out his blog post, comparing the geographically diverse Bulbous offerings:
http://studiohourglass.blogspot.com/2009/04/worlds-largest-lamp.html
Posted by World's Largest Things, Inc. at 9:00 AM 2 comments: 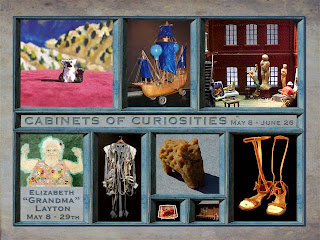 May-June 2009, at the Lincoln Art Center, Lincoln Kansas.
Join us for the opening reception May 8, 5-7 p.m., where you'll hear the obtuse and obfiscated motivations for the show, from WLT Board Member Don Robertson and WLT Director Erika Nelson.  It's gonna be a great show, with some WSVs and WLTs included...
Posted by World's Largest Things, Inc. at 8:55 AM No comments: 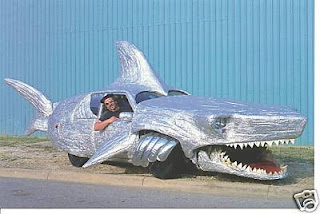 The Art Car world lost on of its greats on Easter Sunday.  Through the numbness that still coats our hearts at this unexpected absence in our lives, the Art Car community is mourning.  Sometimes our reflections lead to bigger and better works, carrying on the unifying desire to inspire through creativity and public artworks that yank the viewer out of their everyday lives.
Obituaries have been printed from coast to coast, as Tom Kennedy touched many lives, with a big happy poke from creative fingers.  This L.A. Times obituary is a god illustration of Tom's wide wide circle.  In memory of Tom, please remember to do something silly in a serious way, and build it big.

Kennedy drowned April 12 while body-surfing off San Francisco's Ocean Beach, said Kat "P.K." Ramos, a close friend and roommate. He was struggling with the riptide when a companion tried to pull him to shore.

The dozens of vehicles that Kennedy transformed into outlandish, original art were joyful creative expressions, his way of winking at the world and daring people not to smile.

His "One-Eyed Wonder" started out as a Ford Ranger and featured a giant eyeball turret with a cannon that shot Twinkies. For a clown, he made two "Hippopautomobiles," converting the front hoods into the animal's broad, grinning mouth. A 1972 Volkswagen-turned-dolphin displayed a signature Kennedy touch, fins.

His first and perhaps most famous creation was "Ripper the Friendly Shark," which he gave a saw-toothed jaw and a tail that swished. The once-simple Nissan Sentra eventually achieved something akin to landmark status in Houston, an early epicenter of the Art Car movement that started to coalesce in the 1990s.

The movement may have gotten a psychedelic assist from the hippie-themed VWs of the 1960s. But it is largely defined by an anything-goes mentality that likely appealed to Kennedy, widely described by friends as a merry prankster.

He was pursuing a career in circulation sales at the Houston Chronicle when he sought to enter the city's annual Art Car parade in the early 1990s.

Kennedy "brought in this picture of this car that he had spray-painted and stuck these metal cutout shapes on and asked, 'Can my car be in the parade?' " recalled Susanne Theis, a former director of the company that produces the parade.

"It was a primitive Art Car, but it morphed into a car that was iconic, and he turned himself into an artist," she said. "He had this instinctive understanding that you needed to connect with people, and he worked at it."

"Ripper" emerged as one of the Art Car movement's "most recognized and inspiring" icons partly because Kennedy took the car "everywhere," including to five Burning Man festivals of artistic self-expression in the Nevada desert, according to "Art Cars," a 2007 book by Harrod Blank.

Kennedy's cars stood out for their sculptural quality and for the way he used them to make political statements, said Philo Northrup, cofounder of ArtCar Fest, an annual Bay Area gathering.

When Ben Cohen of Ben & Jerry's ice cream wanted to protest military spending, he hired Kennedy, whose team built the satirical "Topsy-Turvy" a school bus that had a second upside-down bus welded to its top. Completed in 2007, it was a visual pun that alluded to the idea that military spending came at the expense of education and health.

For the most part, Kennedy's wheeled visions veered more toward buggies that were a "powerful bundle of whimsy," he once said, capable of "reclaiming the commercialism of our culture."

Kennedy was born Oct. 8, 1960, in Elizabeth, N.J., and had a nomadic childhood before settling in southern Oregon when he was about 12.

He studied business administration at Michigan Technological University from 1978 to 1981 then started out on the loading dock at the Houston Chronicle and rose to become circulation sales manager.

In 1992, he earned a bachelor's degree in marketing from the University of Houston and spent the next two years studying sculpture at the school.

After leaving newspapers in 1995, he moved to the Bay Area to build Art Cars and concept vehicles and evolved "into the realm of being an Art Car character," Kennedy once said.

There wasn't much money in it, but between jobs he made functional art, such as gates and globes out of metals. And he reveled in the "growing tribe" of Art Car artists he saw as "goodwill ambassadors."

Through a program he founded in 1996, he shipped bicycles to children in Bosnia during the war there and led an Art Car-inspired bicycle parade.

He ardently entered parades in the U.S. Over four years, he put 80,000 miles on "Max the Daredevil Finmobile," a tow vehicle with 13-foot-high fins that could touch the trees.

In 2007, he married Haideen Anderson, a political performance artist who collaborated on his projects.

The artist defined himself as an "adventurer" and once said: "It seems the world is a little short of adventurers right now. Too many people sitting behind a TV or like a computer screen. Someone's got to be out on the street creating the content. That's me."

In addition to his wife, Kennedy's survivors include his mother, Pat; sister Margret; and brothers Matt and Andy.

Plans for the May 1 memorial include an Art Car convoy that starts in San Francisco and ends with a celebration in Oakland. For details, or to make a memorial donation, go to tomkennedyart.com Donations may be earmarked to the Nonviolent Peaceforce,to a fund to retrieve "Ripper" from storage in Europe, or to defray the cost of the memorial service.

valerie.nelson@latimes.com
Posted by World's Largest Things, Inc. at 9:23 AM No comments:

Members of World's Largest Things, Inc., are entitled to access to the Weekly What's Large Where archives. If you're a member, just let me know, and I'll add your profile to the 'reader' list for full access!

... finally slowed down enough to update the What's New section of the main site, with a list of upcoming "World's Largest Things: Roadside Attractions" and "Inside Outsider Art in Kansas" lectures through the Kansas Humanities Council:

Posted by World's Largest Things, Inc. at 3:49 PM No comments:

A Canadian production company came through in 2007, just in time for the 100th anniversary of the Garden of Eden.  Their series, Driven by Vision, focuses on Outsider Art environments, the people that make them, and the communities that embrace them.  Lucas gets a full episode devoted to it in the current second season, airing this month across the US on the Ovation Network, and across Canada on Vision TV.
"Are We Still in Kansas?" - Wednesday, April 15
"Expect the Unexpected" is the official town motto of Lucas, Kansas – population 436. This tiny community is home to S.P. Dinsmoor's famed Garden of Eden: a collection of enormous cement sculptures depicting the ravages of big business, along with – incongruously – some of his favourite Bible stories. Lucas is also known for such curiosities as a museum of visionary art, a shrine of repurposed mutant Barbie dolls, and the ever-popular "Worlds' Largest Collection of the World's Smallest Versions of the World's Largest Things."
Driven By Vision is produced by Judy Holm and Michael McNamara for Markham Street Films Inc.
Said Michael McNamara: "This is a series with a host of themes: inspiration, creation, redemption, defiance. But ultimately it's about the people who brought these places into existence. What inspired them? What obstacles have they overcome? And why do some of these sites continue to live and breathe while others fall victim to the wrecking ball?"

Added Judy Holm: "As artists and filmmakers, we are fascinated by the subject of inspiration. The people who create these sites are compelled by visions and dreams to share their inner worlds. We feel privileged to have encountered these incredible men and women. It makes us see the world differently, and deepens our faith in humanity."

They spent a good deal of time in cranes getting never-before-seen scenes of the Garden, as well as conductin interviews with townspeople to get the full story.  This research, enhanced by some great historical photos, makes the Driven by Vision production a new benchmark in telling the story of Lucas and the Garden of Eden.  Search your local listings on the Ovation network to see for yourself!

You can also see a preview on their video site - just click on the Driven by Visions tab... 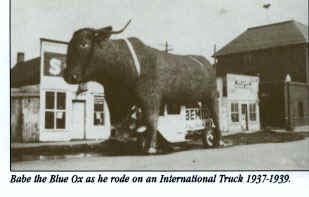 from the Bemidji Chamber of Commerce, and Convention and Visitors Bureau:
http://www.visitbemidji.com/bemidji/paulbabe.html
Posted by World's Largest Things, Inc. at 3:54 AM No comments:

Found on Phoons Around the World, from a backyard visitor, Januar 2008
http://www.phoons.com/smlarge.html
Posted by World's Largest Things, Inc. at 2:08 AM No comments:

Mr. Blandings went to the Belger 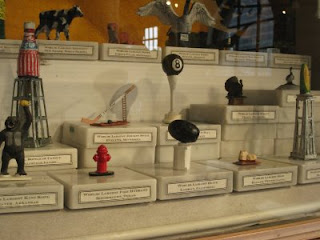 ... and blogged about what he found.  A GREAT overview of the show, and collection of stories behind the art currently on display at the Belger Arts Center in Kansas City
http://mrsblandings.blogspot.com/2009/04/take-detour.html
Posted by World's Largest Things, Inc. at 4:38 PM No comments: