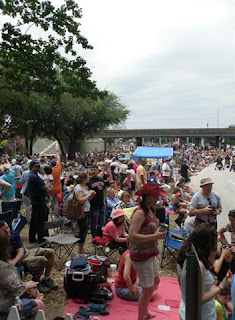 Just got the totals from the Houston Chronicle: 300,000 spectators for the Art Car parade held Saturday, May 8th, 2010.
300 cars were in the lineup this year, the biggest response ever, and beautiful weather made this the BEST Houston Art Car Parade Yet! We were there with 'Scout', and a new addition in the back featured the World's Smallest Version of the World's Largest Art Car Parade, replicating cars of friends and celebrity Art Car artists, as well as some completely fabricated pieces.
It was always billed as the largest, and this year Houston really took it to a new level. Oldest, Largest, Longest, Houston Orange Show Art Car Parade is the Est-est!
-Erika and Scout - OH, and we won a 3rd place trophy in the Art Car category - super extra-added bonus!

Here are links to the actual parade, from the Orange Show, cut up into five segments:

And, Paul McRae's Flickr Photo set from Art Car weekend 2010 - you can also do a photo search, and find thousands more from hundreds of other people shutterbuggin': Paul's Art Car Pics
Posted by World's Largest Things, Inc. at 2:57 PM 2 comments: 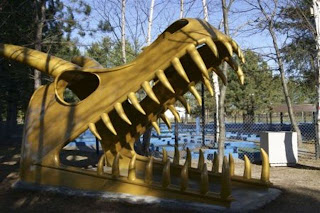 steel Dragon Skull, 22 feet long by 11 feet high, Josee Rainville owner of Dinosaur Valley Mini Golf
Us:  that is GREAT!  You are listed as an owner - did you create it?
-Erika of World's Largest Things
Them:  Thank for the compliment.
my husband has built all the dinosaurs and dragon skull etc on our courses.
Dragon skull is made of new steel, he made all the parts and then put them together.   He worked from a flat picture and created this masterpiece for my birthday.  Took many years to make this Dragon skull.
The design and cement and painting of courses I helped, me being his wife.
The whole attraction is dedicated to our youngest that died of leukemia on May 22 2000 and all cancer families all over the world.
United states pro mini golf  came in 2001 to raise money for the Canadian Cancer society that day, and I have been one of their members since then.
kindest Regards:
Josee Rainville
Thank you for listing us.............  I appreciate it.
Have a great Week end.
Posted by World's Largest Things, Inc. at 2:41 PM No comments:

WLCoWSVoWLT to Telluride for Mountainfilm, May 28 - 31. 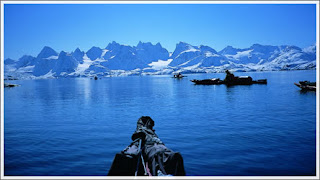 Mountainfilm in Telluride is next week!  I'm a Special Guest, premeiring the new Sideshow Extravaganza during the Gallery Walk on Friday, May 28th.  Check out the site for some amazing work.  And, check out the guest list and featured filmographers - it's quite a lineup:
http://www.mountainfilm.org/festival/2010/gallery_walk.asp
I'm honored to be a part of this amazing festival.  Wish me luck!
-Erika and the
World's Largest Collection of the
World's Smallest Versions of the
World's Largest Things
NEW Sideshow Extravaganza
www.WorldsLargestThings.com
Posted by World's Largest Things, Inc. at 8:08 PM No comments: 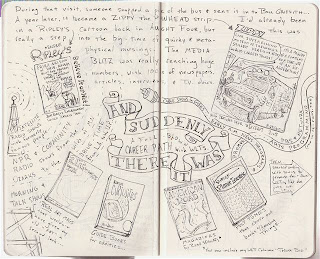 This Friday, Saturday, and Sunday (May 7 - 9, 2010), the fifth showing of the Sketchbook Project goes on view at Home Gallery, 1407 E. 54th Place, Chicago IL. Our hand-drawn book "And Suddenly - There it WAS! A WLCoWSVoWLT Road Trip" can be checked out and perused during this fifth of many showings around the country.
If you're not in the area, you can also check out the posted scans on our page of the Art House Co-Op site:
http://www.arthousecoop.com/projects/sketchbookproject/submissions/12572-and-suddenly-there-it-was-wlcowsvowlt-road-trip
See ya' on the road, and in the galleries!
-Erika
Posted by World's Largest Things, Inc. at 2:43 PM No comments: