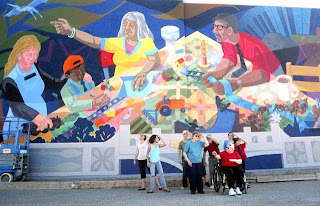 By Christine Wyrick
Newton Kansan
Newton’s new community mural, “The Imagineers,” was dedicated Sunday afternoon in a ceremony that featured dancing, music, speeches — and a lot of sunshine on a 93-degree day.
About 100 people attended the event, which unveiled the mural, a project sponsored by the Mid-America Arts Alliance based in Kansas City, Mo., and the National Endowment for the Arts, on the north side of Combs Organ Co. on Main Street.
Twelve cities competed to host the project, which was fully funded by those two organizations.
Barb Burns, the city’s community advancement coordinator, who along with Rachel Epp Buller from Bethel College served as co-chairwomen for the 2010 Kansas Mural Project, said Newton is the only community in Kansas to host such a painting.
Among those in attendance was a contingency from Joplin, Mo., which is considering applying for the community mural grant in the future.
Community members were involved in the project from the beginning, giving their ideas for what should be included in the mural and actually helping paint the mural.
“... I hope this strengthens the way we come together to work on projects and come to a common good,” Burns said.
Dave Loewenstein, a nationally recognized mural artist, was brought in to guide the project. He had two other professional Kansas artists assist him — Erika Nelson of Lucas and Matthew Farley, a Wichita native.
“This art is for everyone,” Loewenstein said. “It is not to be bought or sold.”
Loewenstein encouraged the community to work on other projects together.
“We hand the baton over to you,” he said. “Go out and make more murals, more sculpture, more parks, increase the size of your farmer’s market,” he said. “Whatever it is, you’ve proven you can do this.”
Nelson said the artists hope community members will come and study the mural to see what images they take from the mural. Some of the images are clear — others are not, she said.
Among the clearly seen images are people of differing ages, a quilt, technology, the clouds on the water tower, a drink, railroad references, birds, trees and a cultivated field.
“Some you’ll have to investigate your own community to (figure) out,” she said.
“Approaching the mural, one sees a group of people around a table engaged in the process of building, playing, restoring and imagining,” the program at the dedication stated. “These figures are symbolic of the Newton/North Newton community. They re not particular people, but a composite of the many and varied citizens in our area ...”
Nelson it was interesting to see people watch the mural come together the last two months.
She said a couple of people stopped by twice a day — once in the morning and once in the evening — to see the latest updates. Another couple came each night to point out areas with a laser pointer.
“Investigate what the mural might mean,” Nelson said. “There are hidden gems in there. You have community stories reflected back at you in unexpected ways.”
One of the highlights of the dedication was a performance by a group of dancers organized and choreographed by Sara Dick especially for the mural project.
The dance, with live music to accompany it, included the dancers — a group that included children through seniors — interpreting their favorite places in Newton and North Newton, such as parks and schools.
They also jokingly teased their least-favorite place in Newton was sitting in a car waiting for a train to pass. Ironically — or perhaps fittingly — a train passed by with whistles blowing just after that.
The dance group included Danika Bielek, choreographer; Helen Bertrand; Emily Blaine; Emma Kliewer; Paige Kliewer; Luella Lohrentz; Olivia Lyles; Marlene Smucker; and Stan Smucker.
The musicians were Jesse Graber, Eric Schrag and Matthew Dudte.
Perry White, president of Bethel College, said public art being used as a way to tell stories has been around for thousands of years.
He said the group is considering options for lighting the mural at night and landscaping around the mural.
“We hope this spurs other community projects,” he said.
Epp Buller thanked the design team for their efforts. The design efforts started about two months ago, with much of the design work done at the Carriage Factory Gallery with the help of director Joe Loganbill.
A red ribbon was cut by Ellie Bradley, a student at Santa Fe Fifth/Sixth Center, who was a member of the design team with her mother.
Other members of the design team were Ray Olias, Jesse Graber, Diane Epp, Los Fernandez, Amy Yountz, Bob Regier, Erin McDaniel, James Janzen, LaDonna Voth, Susan Jantzen, Phil Epp, Pat Washburn, Beth Burns, Ellie Burns, Joe Regier, Pat Hines, Mike Combs, Jim Wimmer, Mikala Gingerich-Gaylord and Loganbill.
Joe Regier Construction donated hydraulic lifts and other equipment for the artists to use during painting. Michael Combs donated the space on his building for the project.
Mural project partners were Vada Snider, Greg Elder Construction, Reba’s, Conrad Snider, Chuck and Cindy Regier, Bethel College and the city of Newton.
“This has been the highlight of the last year,” Loganbill said. “We wanted to do something good for the community. It’s a really good piece of art.”
Posted by World's Largest Things, Inc. at 6:28 PM No comments:

From the Newton Kansan 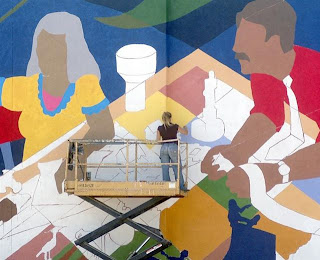 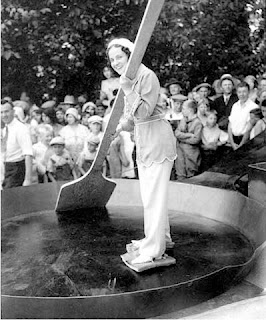 Easy - strap bacon to the feet of a model, have her skate around the pan, and fry 'er up!  Here's a great pic of the amazing event, as read about originally on the World's Largest Egg page:
http://www.worldslargestthings.com/washington/egg.htm
Posted by World's Largest Things, Inc. at 11:15 AM No comments: