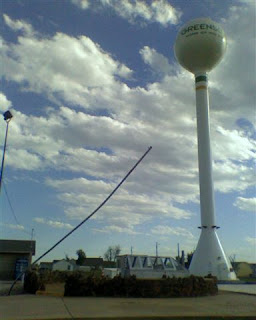 Got to re-visit the World's Largest Hand-Dug Well today.  After the giant Tornado that went through and destroyed the town, the Well became a touchstone of community support.  And, the historic well cover survived, as did the Well itself.  The new water tower continues the tradition of proclaiming the presence of the well, and the oddly shaped stick thing is a flagpole twisted by the twister.
Posted by World's Largest Things, Inc. at 10:27 PM No comments: 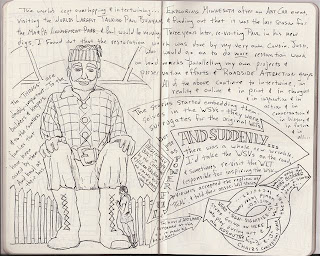 This Friday, Saturday, and Sunday (April 16 - 18, 2010), the fourth showing of the Sketchbook Project goes on view at the Soulard Art Market, 2028 S. 12th Street, St. Louis MO. Our hand-drawn book "And Suddenly - There it WAS! A WLCoWSVoWLT Road Trip" can be checked out and perused during this fourth of many showings around the country.
If you're not in the area, you can also check out the posted scans on our page of the Art House Co-Op site:
http://www.arthousecoop.com/projects/sketchbookproject/submissions/12572-and-suddenly-there-it-was-wlcowsvowlt-road-trip
See ya' on the road, and in the galleries!
-Erika
Posted by World's Largest Things, Inc. at 2:50 PM No comments:

Quite a tale for the Pup 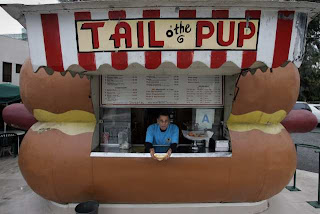 They've long been holding the mustard and everything else at Tail o' the Pup, the landmark L.A. hot dog stand that continues to sit at a warehouse since being evicted from its home five years ago.  Original story here:  http://latimesblogs.latimes.com/lanow/2010/04/tail-o-the-pup-the-landmark-la-hot-dog-stand-still-homeless-.html

Trouble is, Tail o' the Pup owner Dennis Blake doesn't have a place to roll it to.

The landmark hot dog stand that resembles a mustard-slathered wienie-in-a-bun -- featured in movies and music videos and considered an important piece of L.A. architecture -- has sat on wheels and been covered with a tarp in a Torrance warehouse since being evicted five years ago from its longtime home.

Blake badly wants to return the Pup to its chowhound followers. But he can't find a spot to put the tiny hot-dog house.

Crafted from chicken wire and stucco, the stand measures 17 feet from wienie tip to tip. It sits between a shiny aluminum travel trailer and a fiberglass-hulled boat at the Wesco Self-Storage Center on Normandie Avenue.

The Pup had a few bites taken out of it when it was booted from San Vicente Boulevard in West Hollywood. But a couple of stucco patches and some new paint will handle those, Blake said.

"The dog itself doesn't need a lot of work. We'd just have to build a kitchen and attach it to the back of it," he said.

Viewed by architecture experts as an important example of "programmatic" design, in which merchants tried to catch motorists' eyes with buildings shaped like chili bowls, oranges, doughnuts and coffee cups, the Pup had a proud place on L.A.'s streetscape for nearly six decades.

If it comes out of storage and reopens, it won't be the first time that's happened.

Eddie Blake purchased the Pup in the early 1970s from its celebrity owners, the dance team of Veloz and Yolanda.

But in 1985 the Pup was closed to make way for a luxury hotel. The stand sat in storage for a few months until its replacement location on nearby San Vicente Boulevard was found. Its reopening in 1986 was another celebrity-filled affair.

But then a development company purchased the Pup's site at 329 N. San Vicente Blvd. from Blake's landlord, Cedars-Sinai Medical Center, and announced plans to build 152 condominium and apartment units.

By that time, Dennis Blake had taken over the stand from his father. He toyed with the idea of moving the Pup to Westwood after its closure. That's where the development company was willing to let him install it at a Broxton Avenue parking lot it owned.

"But they wanted me to sign a long contract, and I got scared" and turned down the offer, said Blake, 57, of West Hollywood.

Blake received what he calls a "severance package" from the company. More recently, he has lived on the proceeds of the sale of the Westchester home owned by him and his late wife, Mariaelena.

"I've been looking for a new place for it for a year -- in West Hollywood, West L.A., Santa Monica, even Beverly Hills. Someplace our built-in clientele can find us," he said. "I'm ready to rock and roll."

Eddie Blake, 85, said his son needs a space "about 25 feet by 20 feet, plus some customer parking space," before the Pup can be unleashed.

Ironically, the residential project responsible for the stand's shutdown remains unbuilt. Dennis Blake said he would be happy to return to the San Vicente Boulevard site if a long-term lease could be arranged.

Regent Properties, which sold its majority interest in the housing project in 2008, did not return phone calls. But West Hollywood planning officials suggested that financing has held up the proposed three-acre development, which would be their city's largest residential project.

"It might be able to go right across the street from City Hall," Keho said. "Maybe it could go next to Irv's Burgers."

That celebrated 63-year-old hamburger stand at the northeast corner of Santa Monica Boulevard and Sweetzer Avenue was saved from being bulldozed by a coffee chain outlet five years ago after its fans persuaded West Hollywood officials to designate it a cultural resource.

Hot dogs alongside hamburgers. Fast-food fans might relish that.

Posted by World's Largest Things, Inc. at 8:12 AM No comments:

From MSNBC this morning - Giant Heads are spinning. 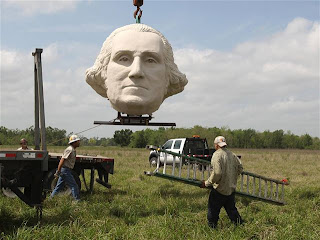 The head portion of a giant bust of George Washington is carried by crane April 6 to a flatbed truck, where it will be secured for delivery. Six busts of presidents were removed because the land they were placed on in Pearland, Texas, is under foreclosure. The development company still owns the statues and will them return to their maker, local artist David Adickes.

Posted by World's Largest Things, Inc. at 8:33 AM No comments: 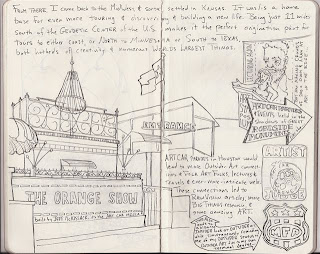 This Thursday, Friday, Saturday, and Sunday (April 8 - 11, 2010), the third showing of the Sketchbook Project goes on view at Art and Shelter Gallery at the Salvation Army Alegria, 2737 W. Sunset Boulevard, Los Angeles California. Our hand-drawn book "And Suddenly - There it WAS! A WLCoWSVoWLT Road Trip" can be checked out and perused during this third of many showings around the country.
If you're not in the area, you can also check out the posted scans on our page of the Art House Co-Op site:
http://www.arthousecoop.com/projects/sketchbookproject/submissions/12572-and-suddenly-there-it-was-wlcowsvowlt-road-trip
See ya' on the road, and in the galleries!
-Erika
Posted by World's Largest Things, Inc. at 2:55 PM No comments: 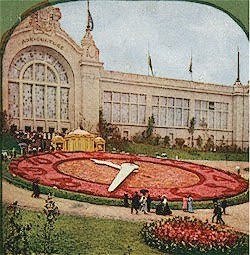