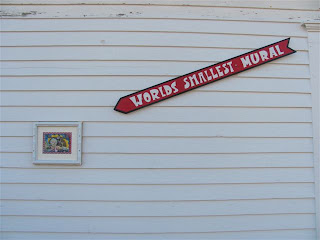 In honor of Kansas' 150th Birthday today, I decided to create The World's Smallest Mural. While the design and wall prep happened yesterday, today, Kansas Day, saw the entire project come to fruition. Starting at 9 a.m., the mural was completed at 4:30, installed on the North wall of the WLT Home Base. I'll upload photos to Flickr, too, but here is the progression album on Facebook in the meantime:


UPDATE! Got the Flickr set ready, with a description of all of the elements on the final mural shot. Enjoy - we had a lotta fun doing it for Kansas' 150th, Kansas Day, Jan. 29 2011.
Posted by World's Largest Things, Inc. at 4:49 PM No comments:

"I'm SOMEBODY!" Biggest Kudos Yet for the WLCoWSVoWLT

Just got two email messages in quick succession - I'm a question in the KSHSAA Scholars' Bowl!

From Rocky: HEY so i was helping with a scholars' bowl in natoma today, and one of the questions was about you!!! although someone from lincoln got it wrong....they said Jay Leno......what the heck right? dont worry, i glared at them..

From Rocky's Mom: By the way Erika. R. helped out with a Scholar's Bowl in Natoma today. One of the questions to the students was, "Erika Nelson of Lucas was on what late night talk show?" Student buzzed in Jay Leno! Beeeeep!! R. thought it was so neat to hear that. YOU ROCK GIRL YOU ARE NOW APART OF TRIVIA!!! WooHoo!!!

It's an honor. A true honor. Better than anything on the Shameless Self-Promotion bookshelf yet...

Watch out, Missouri - Texas wants one of the WLT Titles back... 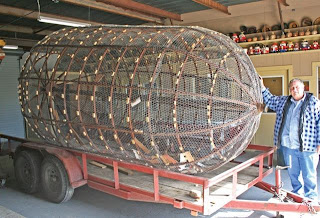 John Pape of Pape's Pecan House shows off the big pecan under construction at Pape's Orchard & Farm Equipment, 5454 S. 123 Bypass. Two employees have been working for two weeks, putting wire mesh on the welded framework, and Pape said the work probably will take them about two more weeks. Then the big pecan will be taken to Red Ewald Inc. in Karnes City to be covered with fiberglass. After painting, it will be placed on display at the Big Red Barn, the Texas Agricultural Education and Heritage Center. Pape said the big pecan will enable "Seguin and Guadalupe County to get back their fame" for having the world's largest pecan.

See the rest of the article in the Seguin Gazette - Locals Make Progress in Building of new World's Largest Pecan - January 25, 2011

Posted by World's Largest Things, Inc. at 4:21 PM No comments:

On the 'Worlds Largest Things' page there is a mention of a picture I would love to see.

Quote from page- "The A 1942 photo of the old WREN building in Lawrence KS (that's where the station started) shows two baby wrens flanking the doors." Is there anyway I could see that photo. I can not find a link to the picture. I live in Lawrence, Kansas and I remember the building and the wrens. 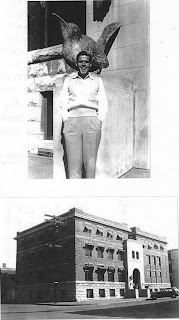 Hello, C.G. -
Attached is one of the few images I have of the building - it's a scan of a photocopy, with the original residing at the Topeka Shawnee County Public Library. I believe the page I have is from their Kansas collection, from a flat file. Sorry there's not more out there, but I haven't yet combed through the Lawrence public library or historical society archives yet - hoping there will be some better info there too.

Photos c. 1946 or 1947, WREN Studios at 8th and Vermont - ony radio station in USA witha private swimming pool (it was a YMCA building before) - info written on back of image copy, either by the librarian or by the person who donated the images to the library.

Hope this helps, and thanks for your inquiry!
-Erika Nelson, Director
Posted by World's Largest Things, Inc. at 2:21 AM No comments: 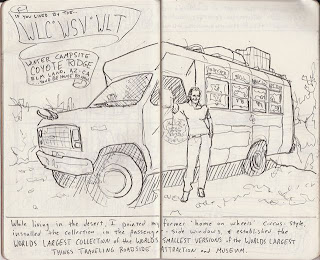 It's finally done, and scanned, and soon to be photocopied and sent off to the 2011 Sketchbook Project tour.  Images will appear (gradually, thanks to dial-up limitations) on the Art House CoOp site, where our last project also lives.  Here's the link to the newest iteration - "If you lived by... ...you'd be home by now"
Posted by World's Largest Things, Inc. at 6:50 PM No comments: