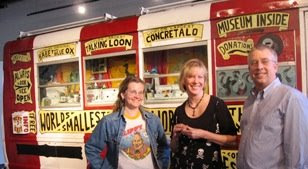 An exhibition at the Belger Arts Center pays tribute to outsider art, works by self-taught artists that aren't often viewed in museums and galleries. There are one hundred fifty works by more than sixty artists, from around the country, from Fulton, Missouri's sign painter Jesse Howard to Georgia's Howard Finster, a preacher and folk artist who collaborated in the 1980s with bands like Talking Heads and R.E.M.