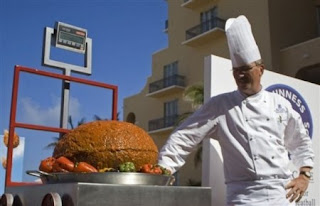 As a promo for an upcoming film "Cloudy with a chance of Meatballs", Sony Pictures produced the World's Largest Meatball.  The Guinness-certified Meatball was created by Ritz Carlton hotel executive chef Rainer Zingrebe on August 4th, 2009.  It weighed in at 109 pounds.  The pool of the Ritz Carlton was decorated with replica giant meatballs and floating plates of spaghetti, along with a giant slice of pizza, large donut, and an ear of corn.
Cloudy with a Chance of Meatballs is a computer-animated parody film produced by Sony Pictures Animation and distributed by Columbia Pictures. It is scheduled for a theatrical release on September 18, 2009 (also in 3D) and is inspired by the children's book of the same name by Judi Barrett and Ron Barrett. The film features the voices of Bill Hader, Anna Faris, Bruce Campbell, James Caan, Mr. T, Benjamin Bratt, Neil Patrick Harris, Al Roker, and many more known personalities.
Posted by World's Largest Things, Inc. at 4:04 PM