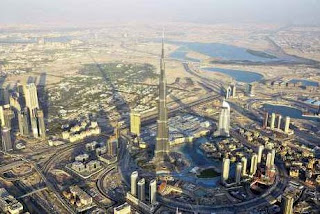 As much as debt concerns plagued Dubai's publicity in the end of 2009 opened, the nascent luxury destination is kicking off 2010 with an epic first to turn the tide as the world's tallest structure, the Burj Dubai, opens.

Although the property's official height remains a secret, it is known to be at least 2,625 feet and exceed the next highest structure (the Taipei 101) by 1,000 feet. The opening has been delayed twice since construction began in 2004.

Worth $1.5-billion, the building will reach 200 stories and will include an observation deck on the 124th floor where visibility can reach 50 miles.

The building also includes the world's largest performing fountain as design firm WET created the 50-story-high Dubai Fountain, a 32-acre lake that is the largest choreographed fountain in the world. Using synchronized lights, music and water that leaps over a record-setting 140 meters into the air, the Fountain also uses projected light to paint with light on its darting water forms