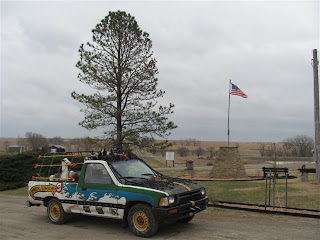 I noticed earlier in the day that we were getting close to a major milestone (ha!), and the Geographic Center of the U.S. was just the right distance away. So, in a spur-of-the-moment move, I headed to Lebanon Kansas, and made it to the Center with 7 miles to spare. I decided to drive the loop around the center until I hit 300,000, but quickly realized (after the first three miles) that the road 'round the Center is only 1/6th of a mile long. So, after 18 laps, I burned up two more miles on a mile-long straightaway, and did two more miles of tiny loops until Viola!! The Odometer crept from 299,999 to 300,000, just past the Geographic Center monument. Whoop!

It's been a trouper of a truck, a 1995 Toyota Pickup (this was the last year you could just by a "pickup" and not a Tacoma), manual transmission, original clutch, and Daily Driver. I bought it brand spankin' new in Jefferson City Missouri, it was assembled in California, and was only 116 miles old when purchased. Since then it's covered ground from Canada to Mexico, Atlantic Ocean to Pacific Ocean, Highest Points and Lowest Points, and has served as an Art Car for about half of it's mileage life. I've been reluctant to seek out a new vehicle, as this one is just the perfect point of not having all the locator and electronic crap, yet updated enough to be safe, have heat and A/C, and you can still pop the hood to see what's wrong. I'll keep it going - let's shoot for a couple hundred thou' more!
Posted by World's Largest Things, Inc. at 10:31 PM