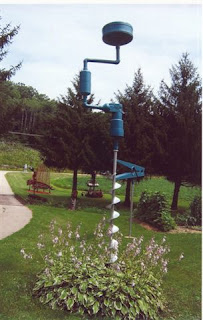 Wallace Keller from Mt. Horeb Wisconsin (home of the Mustard Museum) phoned this morning, to make sure we'd gotten his images of the amazing things dotting his property along Hwy. 78.  Giant clothespins, pirates, slinking beasts, and an amazingly put together hand drill are just the tip of the iceburg.
He's had a colorful life, dabbling in antiquing and real estate along the way, and when he retired he just couldn't help but start something new.  He started making sculptures.  Lots and lots of sculptures.  He'd grown up on a farm, where, by necessity, he learned to weld and fix and tinker until things worked, and was a machinist in the Navy.  That, combined with his fabricating shop past (yes, another carrer path - when you're curious, they add up!) informed his current creations.
They're mostly old metal, combining bits and pieces to make what looks 'right', and there are more than a few Big Things hidden in the menagerie.  He said that the clothespin is one of the few 'new metal' pieces, but the hand drill is an amazing amalgamation of pre-used parts.  He's not sure what part of his brain generated the Big Stuff, he just likes 'em, and makes things that will stand out.
His work can be seen along Highway 78, only an hour from the Wisconsin Dells, and an hour from House on the Rock.  In the realm of metal sculpture, he's also well aquainted with Dr. Evermore (Tom Avery) and his giant Forevertron - they met in the 70s, and the friendship has been a source of inspiration (and scrap metal!) for Wally ever since.
You can also see his work in numerous books, including "Weird Wisconsin", and "Miracles of the Spirit".  Stop on by - he'd be glad to show you around! 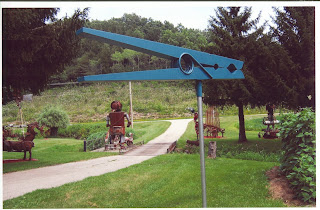 Wally is my uncle and sadly, yesterday he passed away in a terrible accident. This article made me smile despite the tears. He was an incredible man and loved by everyone who knew him.

I am so sorry to hear this - he was a lovely person to chat with on the phone, and was very truthful, humble, and direct in his approach to his work. I'm glad to know he was the same in his approach to life, and I'm so very sorry for your family's loss...

uncle wally was my uncle 2! he will be grealy missed!

I live in Cape Girardeau, Missouri and knew his daughter Rachel. I have seen some of his work at a local restuarant here and some photos of others. What a creative person. My deepest sympathy for the family.
His art has been appriciated, ever far away.