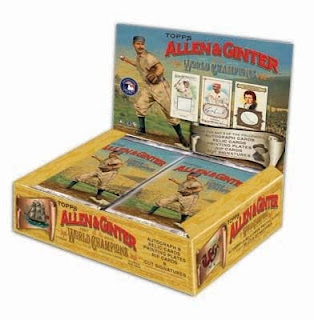 Queen of Kansas Quirky gets own Topps Collector Card

Due to be released on June 30, and in card stores Thursday July 1st, the new 2010 Allen and Ginter set of retro-themed baseball cards will include a regional favorite - the World's Largest Collection of the World's Smallest Versions of the World's Largest Things. Lucas KS based artist Erika Nelson was contacted in February by the head of image licensing about including the WLCoWSVoWLT in the 2010 series after the head of marketing found the World's Largest Things website. The initial call came as the Topps executives were still chuckling over the theme song, and a deal was swiftly struck, pairing Kansas' supurlative-sporting attraction and an industry leader in sports trading cards.

Allen and Ginter, a Richmond, Virginia, tobacco manufacturing firm, created the first cigarette cards for collecting and trading in 1875. In 2006, Topps resurrected the name, producing a specialty line of cards in a vintage style. In addition to modern and historical baseball figures, the sets included special quirky insert subjects - relic cards with real objects from famous people (a piece of JFK's sweater), or a special Sailors of the Seven Seas series. A set of signature cards encourage folks to collect autographs from a wide range of people including Erika and her collection, illusionist David Blaine, skateboarding icon Tony Hawk, and fire eater Hubertus Wawra.

Allen and Ginter sets also include special wooden or silk cards in some of their packages, cards that fold out like books, and special 'rip' cards that hide a small card inside a larger card, only revealed if you physically rip open the larger card. Since it is one of the specialty collector sets, you'll have to seek out a hobby shop that still deals in sports cards. There are only a half-dozen official Topps retailers in Kansas, and the owner of The Arena in Salina feels that this years A&G set will sell out quickly, due to a last-minute inclusion of Stephen Strasburg in all Topps releases, starting with the Allen & Ginter series.