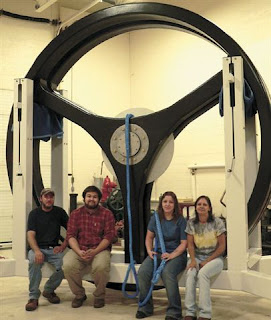 ESCANABA - Popularized in the 1930s, the yo-yo is making a comeback - but not as the familiar child's toy. A 1,625 pound version of the simple, amusing toy will debut in July, courtesy of the Bay College Computer Aided Design (CAD) class.

The official drop will occur at 7 p.m., July 6 in the Bay College parking lot off of Danforth Road. Judges for the drop include: Bay College President Laura Coleman, State Representative Judy Nerat and Vice President of Delta Manufacturing Jean Ross - among others.

The current record for the world's largest functioning yo-yo was set by a group of college students from Manchester, England. It was 10 feet tall, five inches in diameter, weighed 896 pounds, and was dropped from a height of 189 feet.

Looking to defeat this record is the seven member Bay CAD team, which includes: Ryan Fairbanks (team leader), Jacob Nietling, Mark Cocco, Matt Yadro, Jessica Potvin, Viki Branstrom and Adam Hoffman. Though the team has already constructed a larger yo-yo, they must now ensure its functionality - dropping it from a crane and propelling the device back up at least once, with witnesses present. Usage of the crane has been donated by Ness Contracting, so now all the students have to anticipate is whether the structural integrity of the yo-yo can withstand the drop.

While Fairbanks expresses confidence in the metal components, axle of the yo-yo, and rope, which is rated at 81,000 pounds, he and the group have some apprehension about whether the wood will make it through the process. For this reason, CAD Instructor Jerry Havill has worked with the class and college to outline possible risks and how to prevent them.

"The higher we go, the more danger there is, and if it breaks, then we have to consider people, property and everything else - at 90 feet the risk is higher," said Havill. "The process itself has been thoroughly presented to the college itself, as well as the risk manager for the college system, and so we've looked at things very carefully...we've taken all the steps, but when you drop it, you can't guarantee that it won't break."

Other considerations that have been made are wind and crane movement - both of which will be monitored by the crane operator. If conditions prove too unfavorable, the drop will be called off. A perimeter will be set up around the drop site to ensure the safety of audience members.

Over the past several months, the CAD class has used manpower, welding and glue to construct the steel and wood yo-yo. The current version of the yo-yo was adapted from a smaller yo-yo designed by the class. The larger yo-yo is an replica of the smaller version and exactly 40 times larger. The total cost for the construction of the yo-yo has been just over $12,000, which has been primarily raised by the CAD students through various fundraisers and work.

"We received a $5,000 sponsorship and 300 yo-yos to sell from Yo-Yo Factory.com - they will actually be coming up for the drop," said Fairbanks. "We've been working on it for the past four or five months, probably a minimum of four hours a day, so it's quite a bit of time we've put into it."

The requirements put forth by the Guinness World Record officials include creating: a yo-yo that consists of two equally sized, but not especially equally weighted pieces of plastic, wood or metal; a yo-yo that is demonstrated to work in front of judges; and published specifications of the yo-yo, including the weight, the length of the rope, and the diameter.

According to Havill, the entire project has been a valuable experience for the students, who have had unprecedented local support.

"This project has had more local companies involved than any of the other projects," he explained. "We've had three companies with major involvement, and then a lot of other companies that have been involved and helping by either just charging us cost or volunteering their time or equipment."

The most important aspect of the yo-yo construction process, notes Havill, was the student dedication.