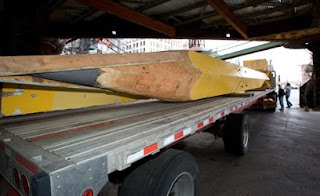 City Museum is now the proud owner of the World's Largest Pencil. This mother-of-all writing utensil stretches 76 feet long and weighs 21,500 lbs. It writes--and erases. It's a No. 2, so it's accepted for standardized testing.
From the City Museum website, via WLT fan email:

Though the pencil arrived at City Museum in two pieces, City Museum plans to re-assemble this 76-foot, 21,500-pound bad boy. And, when City Museum is finished weatherproofing, sharpening, and writing with the World's Largest Pencil, we plan to add it to City Museum's outdoor MonstroCity. Where, exactly, hasn't been decided quite yet.

Some pretty neat stuff...I came across your page looking for the pencil...

I have a blog about a similar interest...roadside attractions, worlds largest things...

Feel free to check it out...
http://randomtravels-therandomtraveler.blogspot.com/

that is freakin huge