Gnome is the Centerpiece of Reiman Gardens' Celebration of Garden Ornamentation

At 15-feet-tall and nearly 3,500 pounds, the yet unnamed creation is the World's Largest Concrete Gnome, besting the old record by two feet, set by a gnome in New York.  A fiberglass replica located in Poland is reported to be taller, but not made of concrete.

Crafted by Andy and Connie Kautza, owners of National Rock and Sculpture, Inc., the gnome traveled 400 miles from Wausau, Wisconsin to its new home in the south-central neck the Gardens.  Plans are to keep it for several years. Garden gnome figurines date back to the 1800's and are a good luck charm for gardeners and farmers.

The gnome displays will be in the Gardens until mid-October. 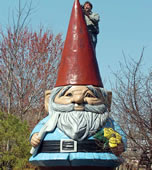 Photo: Artist Andy Kautza, of Wausau, Wis., takes a metal tip off the peak of the largest concrete gnome in the world. Photo by Ronnie Miller/The Tribune (enlarge photo)

The previous Guinness world record for the Largest Gnome was a gnome named Chomsky in upstate New York on the Kelder's Farm. Chomsky is only 13 feet, 6 inches tall and stand in front of miniature golf course.

The world's Largest Concrete Gnome is made from concrete and stands a whopping 15 feet tall and weighs in at more than 3,500 pounds.

Created by Andy and Connie Kautza in Wausau, Wisc., the Largest Concrete Gnome in the world traveled 400 miles to its new home in Ames, Iowa.
Reiman Gardens spent about $8,000 - all from privately raised funds - to have him built at National Rock and Sculpture in Wausau, Wis., which specializes in sculptures for amusement parks and zoos, and facility director Teresa McLaughlin expects the gardens will recoup three times that sum from increased attendance.
The world's Largest Concrete Gnome will enjoy the company of a cohort of about 20 other miniature gnomes painted and decorated by different Iowa organizations. By day, the gnomes may pose as sculptures, but legend has it, they're active at night and eager to help in the garden. Garden gnome figurines date back to the 1800s and are considered to be a good luck charm for gardeners and farmers.
Teresa McLaughlin, of Reiman Gardens, said the world's Largest Concrete Gnome is already getting a lot of attention, which is not surprising to Kautza who is used to stopping traffic when delivering his creations.

"There is some fun just putting your arms around him and getting your picture taken," said McLaughlin.

World's Largest Concrete Gnome facts
• The giant gnome is 15 feet tall, weighs 3,500 pounds and required one cubic yard of concrete, which is enough to pave about 20 feet of sidewalk.
• The gnome consists of two layers of concrete, including a scratch coat that covers its reinforced, iron-welded cage and metal lath, and a second coat that was sculpted, painted and sealed.
• Underneath the nine colors of paint custom-mixed by Sherwin-Williams, the gnome is painted black to add definition to the textures and creases of the sculpture.
The gnome will be officially unveiled on April 22. Leaders at the facility will dedicate the pudgy giant during a ceremony, when it will receive its official name. Among the early entries in an ongoing contest: Knickernobbins, Ginkgowinkle, Whataschnozzle, Gnorbert, Gnelson, Gnormous and, rather inexplicably, Gilbert.
The celebration officially kicks off at noon on April 22, the 40th anniversary of Earth Day, with a tree-planting ceremony with former Iowa First Lady Christie Vilsack, Iowa State Dean of the College of Agriculture Wendy Wintersteen and Ames Mayor Ann Campbell.
The gardens are located at 1407 University Blvd. near Jack Trice Stadium.