From the Email Inbox: New Rubberband Ball Vying for Title 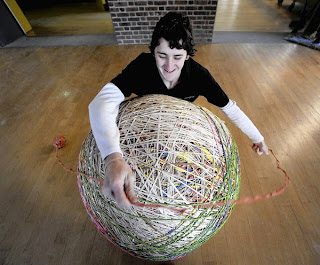 An 11-year-old boy's hobby grows into a single-minded labor of love. It's not the world's biggest by a long shot, but at 400 pounds it's getting there.

It isn't that Tim Gardner has nothing to do. He has a job at Wal-Mart and a steady girlfriend. But the man from eastern Pennsylvania still finds time to knot thousands and thousands of rubber bands together and stretch them onto a rubber-band ball that weighs 400 pounds and lives in a museum on Staten Island, N.Y.

Lives in a museum? Well, no. "Occupies," maybe.

It has been virtually his only hobby since that long-ago August day on his native Staten Island, when he was a bored 11-year-old looking to pass the time. He wound a rubber band into a ball by twisting it around his thumb. Then he added one to it. Then another.

You know how these things go. Before long, his rubber-band ball weighed 10 pounds. He looked up the record for the world's largest rubber-band ball, which at that time weighed something like 1,400 pounds.

"I could beat that," he thought.

When the ball reached 40 pounds, people started to take note. A reporter from the Staten Island Advance wrote about the boy with the rubber-band ball, who would tote it from place to place in a little cart, looking for donations of rubber bands.

"I had all the businesses on Victory Boulevard here," said Gardner, now 23, reminiscing as he wrapped another layer of bands on the ball at the Staten Island Children's Museum. "They all donated to me, so it never occurred to me to buy some."

When the ball reached 300 pounds, the museum contacted him and suggested he house it there, where children could marvel at it.

By that time — 2004 — the world record had increased to 3,120 pounds and was held by a man in Delaware. That did not discourage Gardner, who kept collecting bands of all sizes and colors and visiting the museum whenever he had 15 pounds or so to add to the ball.

That's become harder since June when he moved to Lehighton, a borough of about 5,500 residents 85 miles north of Philadelphia, and lost his old sources of rubber-band donors. He is hoping some publicity might prompt business owners around the surrounding Lehigh Valley to send rubber bands his way.

It's for the kids, after all.

"They'll bring school groups through the museum and it's just neat to see their faces when they get so excited," said Gardner's girlfriend, Jenny Wright.

The ball stands about 3 feet high. It thumps like a bass drum when you hit it. And it has eye-catching textures and colors.

"I've made it black and orange for Halloween," Gardner said. "Red and green for Christmas. Red, white and blue for the Fourth of July. I've done it all."

The record has increased exponentially since 2004, to 9,400 pounds. Some guy in Florida did that, under the sponsorship of an office supply chain. But Gardner looks at his goal as a lifelong one, and said he would keep adding to the ball even if he already held the record. You don't quit knitting just because the scarf is done.

Gardner is aware of exactly how silly this can sound to outsiders. He can be dryly witty about it, as evidenced by his response to colleagues at Wal-Mart who tell him he needs a new hobby.