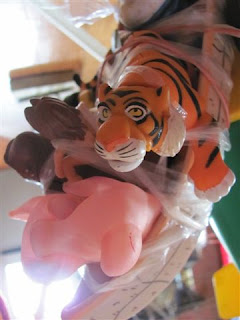 The framework is sort of an exoskeleton, that will still fit through doorways. The idea is to use up all of the crap in the house, working on the Ball inside, until it fills the exoskeleton. Then, it'll move outside. The WLBoPC started on February 19th, in conjunction with another annual project.  This is the second year of participating in Thing-A-Day, where artists commit to making something every single day in February. I've been trying to do an hour of writing about the WLCoWSVoWLT, to capture the stories before I forget them, but in the middle of the month had to take a break and actually MAKE something.

My favorite part is the odd juxtaposition of items...
Posted by World's Largest Things, Inc. at 3:07 PM