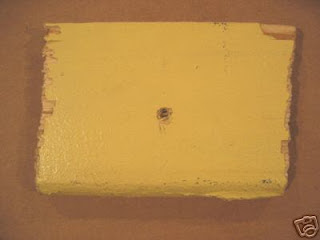 from EBay: piece of the WORLD'S LARGEST HOCKEY STICK (AUTHENTIC)

Measures 6" X 4". The world's largest hockey stick was given to the city of Eveleth, Minnesota by Christen Brothers. This was placed on Grant Ave. in Eveleth, next to the famous Unusual place. The owner of the Unusual place(Jerry Pfremmer) had a big part in getting it to this town,kept the surrounding ground beautiful ! After the unusual place closed it's doors,the city of Eveleth shunned thier roll on the upkeep..(To cheap to do any maintanence on it, eventually it rotted away)..It was removed & another hockey stick was placed there, but the new stick is NOT regulation..Not made of the same material as a real stick..I believe Canada owns the bragging rights now to the world largest stick located in Canada.Just goes to show you really how CHEAP the city of Eveleth,Minnesota is...........They never deserved this wonderfull gift.. THIS IS YOUR ONLY CHANCE TO OWN A PAST PIECE OF ICE HOCKEY HISTORY !!!
This would make a great addition to any collection

It arrived today, in great condition.
Posted by World's Largest Things, Inc. at 9:30 AM

After a 20-year battle to get Canada's largest hockey stick recognized in the Guinness Book of World Records as the world's largest, a small community on Vancouver Island ,Duncan, is getting its wish.

On July 14,2008 the record keepers at Guinness will officially bestow the title of world's largest on the 63 metre, 36 ton wooden stick that once graced the entrance to Expo 86 in Vancouver as the newly built Skytrain zoomed beneath it.

And, Minnesota's 21-metre wooden hockey stick will no longer be No. 1.

Not only that, but the town of Evelyth itself recognizes that the replacement stick is not a true Hockey Stick - I think they may have lost the designation, at least on a technical note, when the original stick was removed and a non-standard replica stick was erected. Oh, the turbulant nature of World's Largest Things!