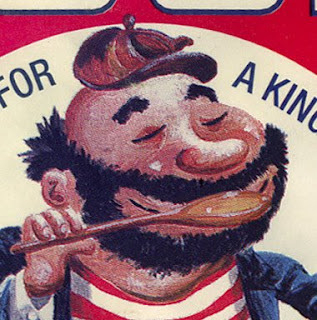 Those pics will also be appearing soon on the WLT Flickr Photo blog, but in the meantime, here's what another Hobo Soup fan says, from a graphic design perspective:
http://www.draplin.com/2008/07/post_319.html
And, a follow-up from the original designer of the label, Dick Stuck (Really!  That's his name!):

From Dick Stuck, Minneapolis, Minn., to his grandson Eric out in Portland,

"Eric, I got a very big kick out of the Hobo Soup you mounted on the web.

At the time I did that label, the originator of the soup, Lem Kaercher was in the state legislature. They happened to have a Saturday session when I took the finished art to Lem in the House of Representatives. He dropped everything and walked around and showed it to every one in the chambers. Forget the State's business, let's take care of the important business ... a soup label.

It's still the same label, and the soup is still in stores all over. I wish I were getting a percentage. I have an exhibit of my stuff at the Old Log Theater. No sales yet, but its only been up a week.

I really hope we can all get together again soon.