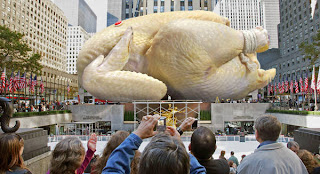 NEW YORK—In what has become a Thanksgiving tradition, more than 10,000 locals and tourists alike braved the cold Monday to watch the annual stuffing of the Rockefeller Center Turkey.

The nationally televised event, which has rung in the holiday season for nearly 80 years, began at 5 p.m., when workers propped open the skin flaps of the 55-foot-tall bird, and pushed an 11-ton mixture of bread crumbs, onions, and other fixings into its massive trunk.

"This year's stuffing is shaping up to be the best one yet," said Mayor Mike Bloomberg, addressing the crowd from a podium next to the giant avian carcass. "Look at that beautiful glistening turkey!"

"Let Thanksgiving begin," Bloomberg added as he ceremoniously picked up a handful of salted butter and coagulated grease from the pile and threw it into the cheering crowd.

Moments after a 150-foot-tall crane stuffed the raw turkey to overflowing, ground crews fastened the bird's gargantuan legs together with nearly 200 yards of kitchen string. According to organizers, the Rockefeller Center Turkey will be basted hourly with 30,000 gallons of natural juices, pumped from industrial hoses, to prevent it from drying out.

The largest Thanksgiving centerpiece to date, the 70-foot-long turkey was personally selected by the mayor from a Maine farm and transported to Rockefeller Center on the back of a flatbed truck. Throughout its journey to the Big Apple, a record number of onlookers greeted the enormous, vacuum-sealed animal, with many a passerby scrambling to get their picture taken alongside it.

"The guidelines we use to find the perfect turkey are based not only on height, but also plumpness and just the right amount of dark meat," said David Murbach, who has helped procure Rockefeller Center's giant turkey for the past 25 years. "While this year we did opt for a commercially grown bird, in 2007 a family living in Vermont donated a 45-foot-tall turkey they had in their backyard."

Crowds reportedly started arriving before noon to watch the festive turkey-stuffing spectacle, which included live musical performances by Josh Groban and American Idol–winner David Cook. In addition, the entire cast of NBC's Chuck received the honor this year of walking inside the turkey's abdominal cavity to retrieve the 1,000-pound giblets packet.

"I knew the crowds were going to be huge, but I wanted my son to be here on the day all the stuffing went in," said Cleveland resident Dean Carlson, who was visiting New York with his family. "You should have seen the look on his face when they peeled back the skin with that giant skidder. This is something he'll remember for the rest of his life."

On Tuesday, gravy boats came up the Hudson River, while dump trucks heaped with mashed potatoes, cranberry sauce, and boiled corn lined Sixth Avenue for nearly a mile. Several dozen workers have also been added to the payroll to shovel congealed fat and gristle off the sidewalks until the end of December.

"You know the holidays are right around the corner when you can smell raw turkey from 50 blocks away," SoHo resident Stephen Finney said. "Thanksgiving in New York just wouldn't be the same without it."

According to historian Steve Medina, the custom of stuffing a Rockefeller Center turkey first started in 1931, when exhausted workers laying the plaza's foundation kept their spirits up by preparing a 10-foot-tall bird right on the construction site. The tradition quickly caught on, and has only grown in pomp and popularity since.

"The Rockefeller Center Turkey has given us so many wonderful memories over the years," Medina said. "From the first honey-glazed bird in 1957, to that image of Mayor LaGuardia raising those giant gizzards above his head to signal the start of another Thanksgiving season."

"Through depression, war, and even food shortages, this incredible tradition has always endured," Medina continued. "Except of course for 1951, when the enormous bird rolled off a cargo train and crushed 64 people before plunging into the East River."

The Rockefeller Center Turkey will be slow-roasted from 5:30 p.m. to midnight each day until Thanksgiving, when the red button pops out, indicating that the bird is fully cooked and ready to be served.

Officials claimed that the turkey would not be wasted this year, as its leftovers will be used to make enough sandwiches to last for the next 10 months.