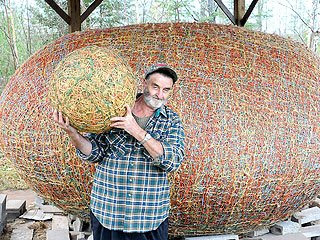 SUPERIOR, Wis. —  Jim Kotera says the challenge hit almost three decades ago and got the ball rolling, so to speak.

He heard of people claiming to have amassed the largest ball of twine in the world and decided to beat them.

Kotera told Superior's online newspaper, The Daily Telegram, that he started his twine ball April 3, 1979. It now stands about as tall as he does.

He's weighed the twine as he added it, including the bags of string saved for him by friends and neighbors, and he estimates the ball weighs just under 20,000 pounds. If it could be unraveled, he claims it would stretch from northern Wisconsin to the Wyoming border.

Kotera, who lives in the town of Highland near Lake Nebagamon, has worked at the Highland dump for nearly 30 years.