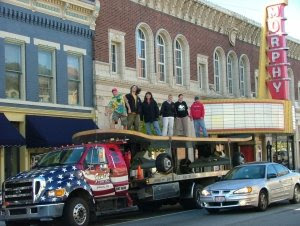 Just got a call from the woman who purchased the World's Largest Skateboard for her community - take a look at the article when it was delivered!
Honey, I shrunk the skateboarders

Either the riders had shrunk, or it was one ginormous skateboard.

Motorists driving Thursday morning on Main Street couldn't help but be all agog when they saw a 31 1/2-foot-long skateboard on the bed of a tow truck from Michigan.

Residents will have plenty of opportunity to check out the world's largest skateboard. Skateboarding enthusiast Jen Stewart of Jen's Deli in Wilmington acquired the skateboard, and she said it will show up at local parades and serve as a stage at fundraisers for the Clinton County Skatepark Association.

Its first appearance will be a 5 p.m. Nov. 7 fundraiser at the Clinton County Family YMCA for a costume dodgeball tournament.

The huge skateboard, a product of an engineering class project, is recognized as the world's largest skateboard in the 2009 edition of the "Guinness Book of World Records." In order to qualify to be in the book, a "Big Wheel" skateboard has to be operational just like a normal skateboard.

"There's no motors, no brakes, and it moves side to side. It has a 50-foot turning radius. Takes 12 people to ride," an elated Stewart said Thursday after her first time on board.

A while back, Stewart and her father Dan talked about building a float for the upcoming second annual Holidazzle Parade in Wilmington.

She began googling to find out how big the largest existing skateboard is and heard about this 31-1/2 feet long board. Jen's subsequent phone call was answered by an engineering professor at Bay de Noc Community College located in Michigan's Upper Peninsula.

The professor told Jen it was funny she had called because he and his students were thinking of putting the skateboard up for sale the following week, and he asked her whether she wanted it. After an exchange of e-mails, Stewart bought the skateboard, with all the money going to Special Olympics, Toys for Tots, and to the school's engineering department to engineer a special walker for a man with a handicap so he can exercise.

There are still some logistics to figure out with the skateboard, Stewart acknowledges.

"We're excited. Maybe we can be in the 'Guinness Book of World Records' for riding the longest distance on the world's largest skateboard. So, we're hoping to get some sort of world record along with it," she said.

"I pity the fool who wants to build a bigger one. Because how are they going to move it?" laughs Stewart.