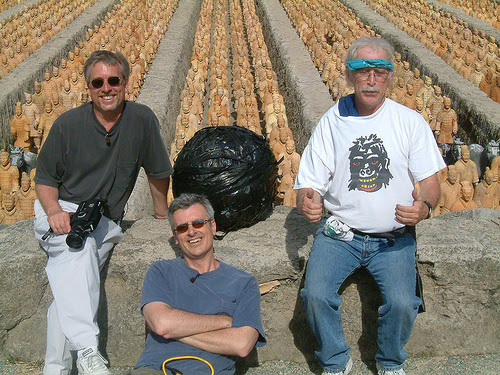 In 1967, Charles Kuralt invented a television genre when he began documenting simple and interesting parts of America and its people with his series of "On the Road" reports for CBS News.

In 1995, soon after Kuralt ended those reports, three guys from a Kansas public television station accidentally picked up the thread. And they've been having nothing but fun with it ever since.

Rare Visions and Roadside Revelations is a half-hour series that finds outsider art in all corners of the country, has fun making the discovery, and tries to include the creators of that art. It's a road trip with a trio of the coolest tour guides ever on public TV -- a kind of a Monty Python meets Rick Steves mix that tells you a lot about what you're seeing and makes you laugh at the same time.

Read the rest on their blog: TV Worth Watching

and we're SO very proud to be on some of their episodes. This article was from East Coast authors, with a little blurb at the bottom as to when/where to catch the show in Philadelphia and New York. Now THAT's coverage... GO! KCPT! GO!