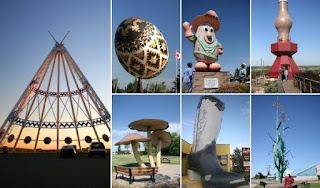 In Egypt, the great Pharaohs commissioned towering pyramids as lasting testaments to immortality. India is the site of the Taj Mahal, and China the Great Wall. Across Europe, cities raise monuments to exalted leaders and famous explorers.

And in the far-flung town of Mundare in the Canadian province of Alberta, near the intersection of highways 15 and 855, stands the world's largest Ukrainian sausage. The 42-foot-tall opus to grilled goodness commemorates the nearby Stawnichy's Meat Processing facility, the region's Ukrainian heritage, and the town's long-running association with various pork products.

No one really knows — or at least they aren't willing to say — just why Alberta seems to be falling all over itself to construct Brobdingnagian shrines to the weird, the wacky, and the downright strange. Actually, that's only partly true: There's usually a somewhat reasonable explanation for many of the gargantuan attractions. Still, the list of oversized memorials reads like the itinerary for a Griswold family vacation.

Read the rest of the story online:
http://www.usairwaysmag.com/2008_08/alberta-homage-to-wierd-wacky.php
Posted by World's Largest Things, Inc. at 11:28 AM