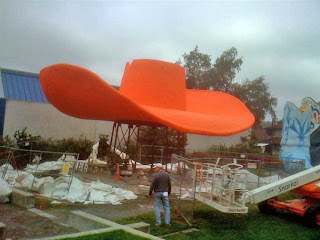 What great news from Seattle Parks and Recreation:
PROJECT STATUS - October 2009
Restoration of the hat is complete!
The Georgetown Community Council and Seattle Parks and Recreation are happy to announce the completion of the restoration on the Hat 'n' Boots. Scaffolding came down from around the hat on October 15, 2009. The painting of the hat was completed soon after and Parks is working on finishing the final details.

The Hat 'n' Boots were moved from thier former location at the "Premium Tex" Texaco gas station on E Marginal Way to Oxbow Park in December 2003. The boots were restored in 2005.

Thank you, Seattle! This Pro Parks project is complete, and the park is open to public. On Saturday, August 13, 2005, the community gathered to dedicate the new park.