Rhode Island Milk Can for sale 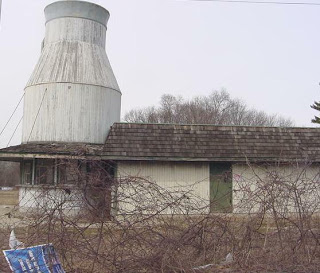 Found it on a real estate blog, with some not-too-bad info in the listing...
A  way of attracting motorists, while they are travelling the highways, to a diner, coffee shop, or roadside attraction was to build the building in an unusual shape, especially the shape of the things sold there. "Mimic" Mimetic architecture became a trend, in the 1930's but in RHODE ISLAND we had ours built in 1807. Many roadside coffee shops were built in the shape of giant coffee pots; hot dog stands were built in the shape of giant hot dogs; and fruit stands were built in the shape of oranges or other fruit or a large milkcan as was the structure built in 1807 at the junction of 146 and 295. This Milk Can was originally located down the road on Louisquisett Pike (Rt 146) in Lincoln, RI, located not far from my home in Lincoln, RI in a neighboring community located at 920 Eddie Dowling Highway, North Smithfield,
RI.

This vacant Milk Can Structure Building that was originally an ice cream stand, built in the shape of a dairyman's cream can 32 1/2 feet high and 16 feet in diameter represented the earliest
period of snack food merchandising located on a major highway, Route 146.

It was moved for highway construction Rt 99 in the late eighties early nineties. It was only moved one mile down the same road from its previous location to a new location.

This container building was a unique expression of architecture, built by the Original owner, Charles Plante that would demand the motorist's notice. In 1950 a canopy and Kitchen was a major addition, as well as a patio area in 1960.