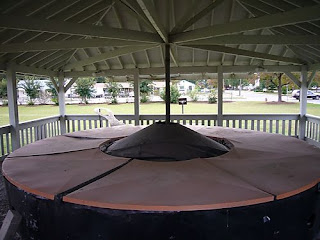 That's how things work here - a brief mention in an article, and Viola!  You find another WLT, hiding in plain sight.  As mentioned in the previous post, there are more than a few that USED to be used, but this one has been in service (and still cookin'!) since 1965.
From the July 15, 1982 issue of the Wilmington Morning Star:   ROSE HILL ADPOTS FRYING PAN
The town of Rose Hill became owner of what is called "the world's largest frying pan" Tuesday night.
The huge pan, actually in eight sections joined together, has been the centerpiece of poultry promotions and jubilees since 1963.
Promised removal of the centerpiece to Kenansville for the first Duplain County agricultural fair in 60 years, prompted the action.
Dennis Ramsey explained,"  I'm displeased with its leaving town.  It's only left town once and that was to White Lake for a blueberry festival.  At that time we were promoting our own Rose Hill Jubilee and poultry products.
For several years the pan has rested under a gazebo on a lot adjacent to the Rose Manor shopping center south of Rose Hill.  Previously, it was located on the town park, the former Rose Hill school campus.
Tuesday night, Ramsey offered the pan to the town if it would provide a suitable location.  The board of commissioners accepted the pan during its regular July meeting.  The board plans to provide a permanent site for the pan in the town park beside U.X. 117.
The pan, 15 feet across, is made of 1/4-inch steel.  It can fry 265 chickens at one time.  The pan requires 140 gallons of cooking oil and eight sets of tobacco burners for heating.
Posted by World's Largest Things, Inc. at 2:19 PM