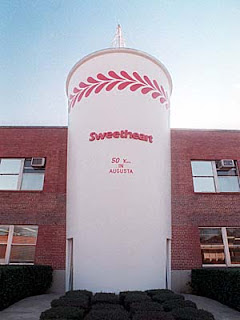 I can also confirm your report that the large cup in Riverside was once a Lily Tulip cup factory. In the early 1960s (and probably in the 1950s) the cup was white with a design like the one in the attached photo, except the color was sort of a blue green, as I recall. The rest of the cup was white. My grandparents lived near there and we would walk up to nearby train track to watch the trains go by. I always liked this cup design, perhaps just for nostalgic reasons, but I wish they were still made. I believe in later years, the factory was purchased by the Sweetheart cup company. The paint job was changed to something more contemporary for the early 1970s. After that, I lost track of it as my grandparents sold their home by that time.

K.A. - Thanks for image! I do like this design better, as it is the cup I remember, too, from my great Aunt's house... I think this one is from Springfield Missouri, but there seem to be more and more of these popping up. Some still in use (by the factory), some abandoned like the one in Riverside.

I was doing a search of Sweetheart cups and your site came up.

I used to work at the one in Riverside. The cup in Riverside is quite different and maybe a lot bigger than the picture you have posted.

Thanks for then nice article...and memories.