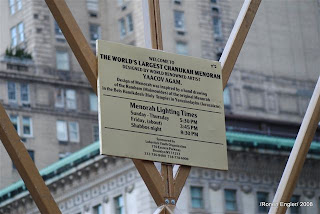 NEW YORK, Nov. 21, 2010 /NEWS.GNOM.ES/ — The World's Largest Chanukah Menorah will be proudly standing at New York's most fashionable plaza, Fifth Avenue and 59th Street, by Central Park, between the Plaza and the Pierre Hotels. The first candle will be lighted on Wednesday evening December 1, and the full Menorah will be lighted on Wednesday evening December 8. All weekday lightings are at 5:30 PM. Over the years the World's Largest Menorah was lighted by New York City Mayors, Abraham Beame, Ed Koch, David Dinkins, Rudolph Giuliani and Michael Bloomberg, Governors Mario Cuomo, George Pataki and David Paterson, United States Senators Jacob Javits and Charles Schumer, as well as many other dignitaries.

"The Menorah stands as a symbol of freedom and democracy, strength and inspiration, delivering a timely and poignant message to each person on an individual basis," said Rabbi Shmuel M. Butman, Director Lubavitch Youth Organization.

The Menorah was certified by Guinness World Records as the World's Largest. It was specially designed by world renowned artist Yaacov Agam who lighted the Menorah many times. It was inspired by a hand drawing by the Rambam (Maimonides) of the original Menorah in the Holy Temple of Jerusalem.

The Menorah stood in miniature on the desk of the Lubavitcher Rebbe who personally approved its form. The Rebbe wanted this Menorah to be the world's largest and when there was talk about making a large Menorah in another city the Rebbe asked for that city's Menorah to be smaller.

Due to the height of the Menorah, it will be lit nightly with the help of a Con Edison "cherry-picker" crane as well as two lifts that lift the lighters to the "Menorah Heights."