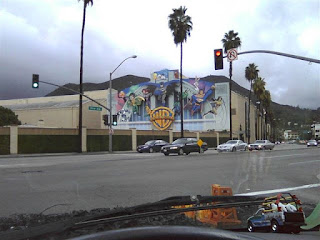 1:00 - at studio. Yes, I'm early, but that's just what I do… Security guards exceptionally nice, asked about the Art Car, then directed me on a circuitous route to the Conan studio entrance (they called some buddies, wanted them to see, so the car had a bit of a parade.)

1:30 - 4:00 - Waiting, conversation with producer about final cut of models, talking with stage crew about attaching models to bases, people arriving and green room area getting crowded. Rehearsal, more waiting, hair and makeup, then it's time! Standing on a piece of tape waiting for the two large crew guys to open the curtains…

After 4:30 - ON! GREAT introduction, with a shout-out to Lucas, then I meet a very tall redhead who makes sure to say "Thank you for doing this!" as I walk over. Interview, commercial break, some more chit-chat with Conan and Andy, then hung out on the couch during Jimmie Vaughn. Went over to meet the band, say thanks, and back to pack things up.

WHEW! Back out into a downpour, and to the hotel to decompress.

8:00 - Picked up a nice dinner, a bottle of wine, and gonna watch Conan from a swanky Burbank hotel - whoop!