Distressing story from the L.A. Times - Roadside Attractions on the decline 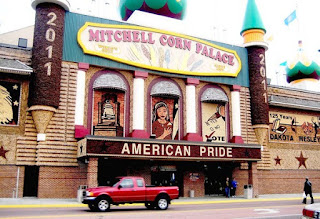 Corn Palace is a husk of its former self

Roadside attractions like the kitschy South Dakota building are drawing fewer and fewer visitors every year. Many owners face the choice to revamp — but how? — or shut down.

By Tina Susman, Los Angeles Times - December 1, 2010
Reporting from Mitchell, S.D. —
In the cornucopia of kitschy roadside attractions, few rival the Corn Palace, a monument to maize that rises from this prairie town's main drag like a Hollywood prop tossed off the back of a big rig barreling down the interstate.

Its green-and-yellow onion domes and spires tower over Main Street, an otherwise unremarkable avenue of low-rise buildings. Golden husks and hundreds of thousands of colorful cobs — held in place by more than a ton of nails, wires and staples — blanket the exterior. Inside, the enticing aromas of popped corn, candied corn and raw ears of corn float down hallways lined with old photographs of the World's Only Corn Palace, as it is described in fliers and on billboards.

But times and tastes have changed since the Corn Palace gained fame in 1892, and there is concern about dwindling visits to the attraction, which is key to the economy in this southeastern South Dakota town of 14,500.
Read the rest on the L.A. Times Website...
Posted by World's Largest Things, Inc. at 9:31 AM